Being greeted by hula dancers and burly Samoans twirling fiery torches are some of the perks when arriving at one of the hottest beach destinations in the Pacific. But, of course, the sands and clear waters of Hawaii isn’t what draws everyone here. Traveling inland and up 4000 meters, atop the dormant shield volcano, Mauna Kea, there is research being done.  You see, upon the summit rests the Canada-France-Hawaii Telescope (CFHT for short), and for those who frequent the facility, they typically tend to do more than watch the sunset while drinking piña coladas. On the contrary, most of the research conducted — obviously — occurs after sunset, when the stars are bright.

Now, you might be wondering if there was an ulterior motive for establishing an observatory on a warm tropical island, and you would probably be greeted with a wry smile should you ask anyone who was on site, however there are some very good reasons for why this location was chosen. As J.J. Kavelaars, an adjunct professor at the University of Victoria and member of Herzberg Astrophysics Institute, put it, the answer is quite simply that the Hawaiian Islands are actually a great location due to the following: being in the middle of the pacific, there is minimal light pollution; the air flow is smooth with minimal convective cells (this of course minimizes the twinkling and blurring of distant objects); and with the telescope being 4000 meters above sea level, the thin, dry air limits the amount of optical disturbances, mostly caused by water absorption within the spectrums being observed.

Since 2003, Kavelaars has been a member of two projects involving the surveying and cataloging of — albeit, remotely from his offices in British Columbia — celestial bodies in the outermost regions of the solar system. Beyond the eighth planet, Neptune, there exists a family of objects aptly named trans-Neptunian objects, or TNOs for short. (Classification of the objects in these outer regions gets a bit complicated, since we have the Kuiper belt, the scattered disk, and the Oort cloud beyond, but let’s not dwell too much on the specifics). Most of the material in these outer regions are said to be icy remnants from the formation of the solar system in that they were either too far distant to be gravitationally towed-in to what eventually formed the planets, or were flung out during all the chaos that ensued during that formation. Currently, there are roughly two thousand trans-Neptunian objects known, and they range from roughly 50 kilometers all the way up 2400 km in diameter.

In astronomy metrics, if we call the distance from the sun to the earth as one astronomical unit (1 AU), then the Kuiper belt region would extend from 30 to 50 AU (and if we include the scattered disk, we can extend that further to 100 AU). As the distances increase, the chances of detecting a TNO are lowered, and this is in due part to the nature of light. The intensity of light drops off significantly as it leaves its source, and since the CFHT relies on the sun’s light to reflect off of the TNOs, and then return it back to Earth, detecting TNOs at a distance greater than 50 AU proves difficult. So, from the vantage point in Hawaii, most objects that have been observed lie within the 30 to 50 AU range.

Most notably, the dwarf planets are the most prominent objects to exist within the Kuiper belt and beyond. Those include the beloved Pluto, which the New Horizons space probe had returned high resolution images quite recently in 2015; Eris, which is purported to be comparable in size with Pluto, and hence what demoted Pluto’s standing as a planet in 2006; Haumea, Makemake, Sedna, and so on, and so forth.

Now, by definition, dwarf planets resemble their larger counterparts, although they lack certain characteristics. Like their big brothers, or sisters, they must contain enough mass such that the gravitational force has altered and compressed all its matter into a spherical ball. The size, or diameter, of a dwarf planet also depends on its composition — it may be rocky, or icy, or somewhere in between — and it turns out that it requires more force, and thus more mass, for a rocky body to be rounded out than it does for an icy one.

If we take Caltech’s Mike Brown, who also studies TNOs, at his word, and consider the lowest limit for when a rocky body would become round, he points to the largest rock in the asteroid belt, Ceres — also a dwarf planet, in its own right — with a diameter of 900km. As for an ice ball, Brown considers one of Saturn’s satellites, Mimas, to be the lower limit with a diameter of 400 km. With all that in mind, despite the International Astronomical Society officially only recognizing five dwarf planets, if we consider Brown’s limits, he estimates there are close to 200 dwarf planets within the solar system.

This all lines up with Kavelaars’ discovery of a distant object in February of 2016, while reviewing data from the Outer Solar System Origins Survey (OSSOS). Not-so-glamorously named 2015 RR245, it is estimated to have an average diameter of around 670 km, which is much larger than the icy lower limit placed by Brown; however, this quoted diameter is simply an average within a vast range. You see, the difficulty of all these estimates on size is that these objects are at such great distances (in the case of RR245, it is currently around 34 AU), and as such, are not clearly visible and their composition is frankly unknown. What can be done, however, is to provide a range based on the object’s returned light intensity and give its size an upper and lower limit depending on whether it is icy (highly reflective) or rocky (less reflective). Unfortunately, this object, like many other dwarf planet candidates, will remain with these wide open ranges until larger, more sophisticated telescopes are built. One such telescope, The Large Synoptic Survey Telescope (LSST) is projected to be completed and operational by 2022, and may perhaps pinpoint its size, and shape, with more accuracy.

Meanwhile, J.J. Kavelaars won’t be waiting around as he continues his research on TNOs. Next month he will be at the Gemini Observatory at their new operation center in Hilo Hawaii. Perhaps with a piña colada in his hand.

The Fox and the Grapes 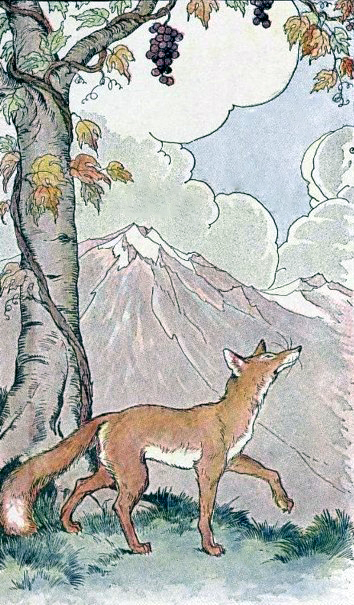 The fox jumped and jumped, but could not get at the grapes above. Giving up, he tells himself, "Oh well, they were probably unripe anyway."
Loading Comments...